The Great Sophists in Periclean Athens 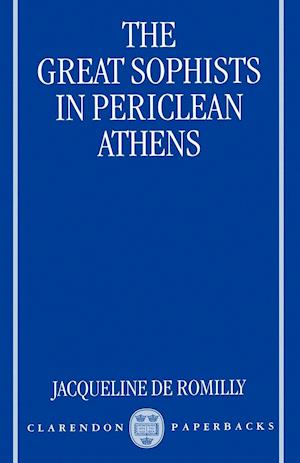 'a brilliant introduction to the Sophists of fifth-century Athens and a major reinterpretation of the goals and effects of their thought. Engagingly written, this eminently accessible account deserves lasting popularity.' Choice 'This is a fine work, indispensable for any study of Socrates, the Sophists or Plato . . . the interest of de Romilly's book lies not only with the combination of enthusiasm and sound scholarship in the use of a wide range of texts, but also in the general and continuing problems of dialogue between thinkers ahead of their times and their contemporary public.' Phronesis 'a vigorous and stimulating book which richly deserves to be made available to an English-speaking readership.' Classical Review 'now available in this smooth and readable translation . . . a lively and engaging introduction to the Sophistic movement. While Great Sophists is written primarily for a general educated audience, scholars will find much of interest in de Romilly's reconstruction of the age of the Sophists. De Romilly deserves much credit for bringing a remarkable immediacy to the subject . . . Classicists and the general public should appreciate this new and controversial assessment of theSophistic movement.' Bryn Mawr Classical Review 'It was a happy idea of the Oxford University Press to commission an English translation from Janet Lloyd, the premier translator of major French work in ancient Greek cultural studies . . . Lloyd's version is not merely accurate and fluent but faithful also to the effervescent (lan of the original' Times Literary Supplement 'compelling . . . Exquisite nuance informs both writing and translation' Religious Studies Review

Forfattere
Bibliotekernes beskrivelse An introduction to the Sophistic movement of 5th-century Athens and a reinterpretation of the goals and effects of their thought. The text explores the ideas of Socrates, the Sophists and Plato, and the problems of dialogue between thinkers ahead of their times and their contemporary public.