- Wittgenstein and Nonsense, Theology and Philosophy 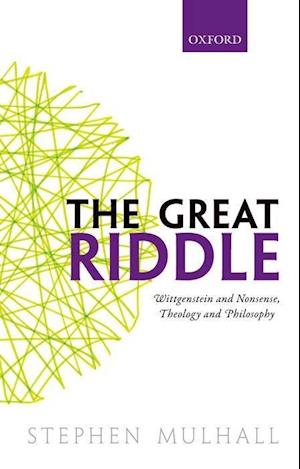 Can we talk meaningfully about God? The theological movement known as Grammatical Thomism affirms that religious language is nonsensical, because the reality of God is beyond our capacity for expression. Stephen Mulhall critically evaluates the claims of this movement (as exemplified in the work of Herbert McCabe and David Burrell) to be a legitimate inheritor of Wittgenstein's philosophical methods as well as Aquinas's theological project. The major obstacle to thisclaim is that Grammatical Thomism makes the nonsensicality of religious language when applied to God a touchstone of Thomist insight, whereas 'nonsense' is standardly taken to be solely a term of criticism in Wittgenstein's work. Mulhall argues that, if Wittgenstein is read in the terms provided bythe work of Cora Diamond and Stanley Cavell, then a place can be found in both his early work and his later writings for a more positive role to be assigned to nonsensical utterances-one which depends on exploiting an analogy between religious language and riddles. And once this alignment between Wittgenstein and Aquinas is established, it also allows us to see various ways in which his later work has a perfectionist dimension-in that it overlaps with the concerns of moral perfectionism, andin that it attributes great philosophical significance to what theology and philosophy have traditionally called 'perfections' and 'transcendentals', particularly concepts such as Being, Truth, and Unity or Oneness. This results in a radical reconception of the role of analogous usage in language,and so in the relation between philosophy and theology.

Forfattere
Bibliotekernes beskrivelse Can we talk meaningfully about God? Grammatical Thomism affirms that religious language is nonsensical, because the reality of God is beyond our capacity for expression. 'Nonsense' is standardly taken to be a term of criticism in Wittgenstein's work, but Mulhall argues that we can exploit an analogy with riddles to take a more positive view.