- A World War I Story of Treachery, Tragedy, and Extraordinary Heroism 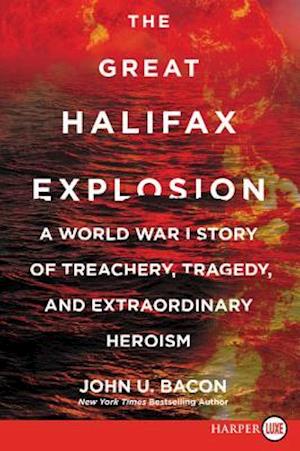 NATIONAL BESTSELLER - The riveting, tick-tock account of the largest manmade explosion in history prior to the atomic bomb, and the equally astonishing tales of survival and heroism that emerged from the ashes, from acclaimed New York Times bestselling author John U. Bacon

After steaming out of New York City on December 1, 1917, laden with a staggering three thousand tons of TNT and other explosives, the munitions ship Mont-Blanc fought its way up the Atlantic coast, through waters prowled by enemy U-boats. As it approached the lively port city of Halifax, Mont-Blanc's deadly cargo erupted with the force of 2.9 kilotons of TNT--the most powerful explosion ever visited on a human population, save for HIroshima and Nagasaki. Mont-Blanc was vaporized in one fifteenth of a second; a shockwave leveled the surrounding city. Next came a thirty-five-foot tsunami. Most astounding of all, however, were the incredible tales of survival and heroism that soon emerged from the rubble.

This is the unforgettable story told in John U. Bacon's The Great Halifax Explosion a ticktock account of fateful decisions that led to doom, the human faces of the blast's 11,000 casualties, and the equally moving individual stories of those who lived and selflessly threw themselves into urgent rescue work that saved thousands.

The shocking scale of the disaster stunned the world, dominating global headlines even amid the calamity of the First World War. Hours after the blast, Boston sent trains and ships filled with doctors, medicine, and money. The explosion would revolutionize pediatric medicine; transform U.S.-Canadian relations; and provide physicist J. Robert Oppenheimer, who studied the Halifax explosion closely when developing the atomic bomb, with history's only real-world case study demonstrating the lethal power of a weapon of mass destruction.

Mesmerizing and inspiring, Bacon's deeply-researched narrative brings to life the tragedy, brvery, and surprising afterlife of one of the most dramatic events of modern times.

December 1917: the freighter Mont-Blanc steamed out of New York Harbor packed with a staggering load of explosives intended to break the ghastly stalemate on the Western Front. The floating powder keg bobbed up the Eastern seaboard for four days, avoiding rocky shores and German U-boats. But after reaching the safety of Halifax Harbour, a collision sparked a fire on deck, the panicked crew fled, and the burning ghost ship drifted toward the city. At 9:04 a.m. a cataclysm unlike anything the world had ever seen erupted.

This is the unforgettable story told in John U. Bacon's The Great Halifax Explosion a ticktock account of the hours preceding the disaster, the fateful decisions that led to doom, the human faces of the blast's 11,000 casualties, and the aftermath. The blast dominated global headlines, transformed Canada and the United States from adversaries to allies, and, years later, gave J. Robert Oppenheimer his best case study in the power of a weapon of mass destruction. Mesmerizing and inspiring, Bacon's deeply researched narrative brings to life the tragedy, bravery, and surprising afterlife of one of the most dramatic events of modern times.