The Great Canadian Book of Lists 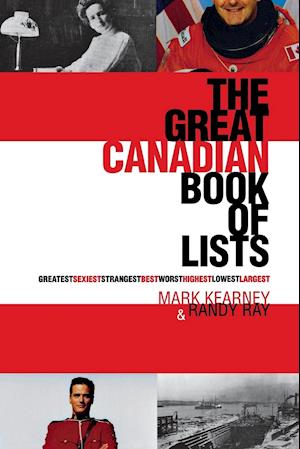 Who were Canada's ten most romantic couples of the twentieth century? What were this country's worst disasters, its ten best beers, and its most controversial works of art in the past one hundred years? Where will you find the most haunted places in Canada and who are Canada's greatest heroes, its most accomplished athletes, and its most despised criminals? The Great Canadian Book of Lists chronicles a century of achievements, trends, important and influential people, and fascinating events that have shaped this country as it heads into a new millennium. Award-winning writers Mark Kearney and Randy Ray, who have delighted readers with their bestselling books The Great Canadian Trivia Book and The Great Canadian Trivia Book 2, turn the spotlight on the twentieth century to determine the best, worst, and most significant happenings in our lives. Not content with supplying a shopping list of items about Canada, Kearney and Ray provide plenty of details to support why certain people and events are included on the lists. And their statistical snapshots comparing a variety of societal trends over different years show readers how Canada has changed in the course of the past century. You'll also learn how experts from the worlds of science, sports, lifestyle, literature, and politics rate the personalities and events that have made Canada what it is today. And several guest celebrities weigh in with lists they've created exclusively for The Great Canadian Book of Lists. Enlightening, controversial and fun, The Great Canadian Book of Lists is bound to start as many arguments as it settles. Was Guy Lafleur a better hockey player than Rocket Richard? Why are rower Silken Laumann and actress Margot Kidder on the same list? What were the best Canadian novels of the twentieth century? And what are some key milestones achieved by Canadian women, medical doctors, inventors, and musicians? Innovations and flops, successes and failures, comebacks and breakthroughs, record setters and trend setters: You'll find them all in The Great Canadian Book of Lists.