The Geometry of Creation

- Architectural Drawing and the Dynamics of Gothic Design 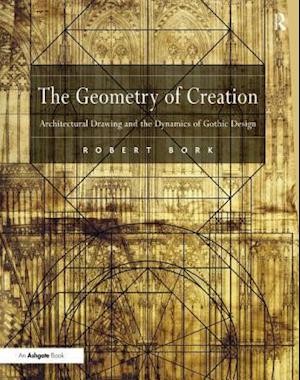 The flowering of Gothic architecture depended to a striking extent on the use of drawing as a tool of design. By drawing precise "blueprints" with simple tools such as the compass and straightedge, Gothic draftsmen were able to develop a linearized architecture of unprecedented complexity and sophistication. Examination of their surviving drawings can provide valuable and remarkably intimate information about the Gothic design process. Gothic drawings include compass pricks, uninked construction lines, and other telltale traces of the draftsman's geometrically based working method. The proportions of the drawings, moreover, are those actually intended by the designer, uncompromised by errors introduced in the construction process. All of these features make these drawings ideal subjects for the study of Gothic design practice, but their geometry has to date received little systematic attention. This book offers a new perspective on Gothic architectural creativity. It shows, in a series of rigorous geometrical case studies, how Gothic design evolved over time, in two senses: in the hours of the draftsman's labor, and across the centuries of the late Middle Ages. In each case study, a series of computer graphics show in unprecedented detail how a medieval designer could have developed his architectural concept step by step, using only basic geometrical operations. Taken together, these analyses demonstrate both remarkable methodological continuity across the Gothic era, and the progressive development of new and sophisticated permutations on venerable design themes. This rich tradition ultimately gave way in the Renaissance not because of any inherent problem with Gothic architecture, but because the visual language of Classicism appealed more directly to the pretensions of Humanist princes than the more abstract geometrical order of Gothic design, as the book's final chapter demonstrates.

Forfattere
Bibliotekernes beskrivelse Offers a fresh perspective on Gothic architectural creativity. This book shows, in a series of geometrical case studies, how Gothic design evolved over time, in two senses: in the hours of the draftsman's labor, and across the centuries of the late Middle Ages.