The Genesis of Grammar 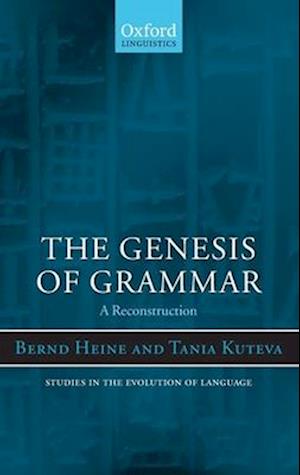 This book reconstructs what the earliest grammars might have been and shows how they could have led to the languages of modern humankind.Like other biological phenomena, language cannot be fully understood without reference to its evolution, whether proven or hypothesized," wrote Talmy Givon in 2002. As the languages spoken 8,000 years ago were typologically much the same as they are today and as no direct evidence exists for languages before then, evolutionary linguists are at a disadvantage compared to their counterparts in biology. Bernd Heine and Tania Kuteva seek to overcome this obstacle by combininggrammaticalization theory, one of the main methods of historical linguistics, with work in animal communication and human evolution. The questions they address include: do the modern languages derive from one ancestral language or from more than one? What was the structure of language like when it first evolved? And howdid the properties associated with modern human languages arise, in particular syntax and the recursive use of language structures? The authors proceed on the assumption that if language evolution is the result of language change then the reconstruction of the former can be explored by deploying the processes involved in the latter. Their measured arguments and crystal-clear exposition will appeal to all those interested in the evolution of language, from advanced undergraduates to linguists,cognitive scientists, human biologists, and archaeologists.

Forfattere
Bibliotekernes beskrivelse This book reconstructs what the earliest grammars might have been and shows how they could have led to the languages of modern humankind. It considers whether these languages derive from a single ancestral language; what the structure of language was when it first evolved; and how the properties associated with modern human languages first arose.