The Freedom of Information Officer's Handbook 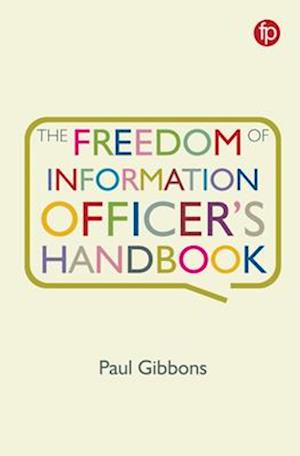 Freedom of information (FOI) is now an international phenomenon with over 100 countries from Albania to Zimbabwe enacting the right to know for their citizens. Since 2005, the UK's Freedom of Information Act has opened up thousands of public bodies to unparalleled scrutiny and prompted further moves to transparency. Wherever the right to know is introduced, its success depends on the way it is implemented. In organisations worldwide, FOI only works because of those who oversee its operation on a day-to-day basis, promoting openness, processing requests and advising colleagues and the public. FOI is dependent on the FOI Officers. The Freedom of Information Officer's Handbook is a comprehensive guide to FOI and its management. It is designed to be an indispensable tool for FOI Officers and their colleagues. It includes:a guide to the UK's FOI Act, the right to know and the exemptionsclear analysis of the most important case law and its implications for the handling of FOI requestspointers to the best resources to help FOI officers in their workexplanations of how FOI interacts with other legislation, including detailed explorations of the Environmental Information Regulations 2004 and how the EU's General Data Protection Regulation impacts on FOIa look at requirements to proactively publish information and the effect of copyright and re-use laws on FOI and open datacomparisons of the UK's Act with FOI legislation in other jurisdictions from Scotland to South Africaan exploration of the role of the FOI Officer: who they are, what they do, their career development and what makes them effectivesuggestions on how to embed FOI within an organisation using effective procedures, technology and traininga stage-by-stage guide to processing requests for information.The Freedom of Information Officers' Handbook includes the latest developments in FOI including amendments made to the UK's FOI Act by the Data Protection Act 2018 and the revised s.45 code of practice published by the Cabinet Office in July 2018.

Forfattere
Bibliotekernes beskrivelse This book provides a comprehensive guide to the practical management of freedom of information compliance, including interpretation of the Act as well as the Environmental Information Regulations.