The Forgotten Prime Minister: The 14th Earl of Derby 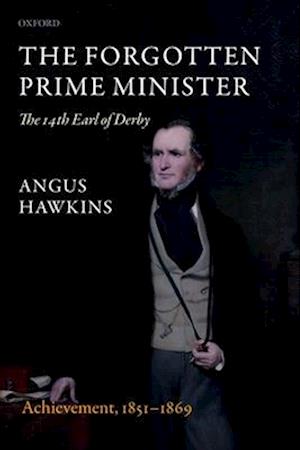 Lord Derby was the first British statesman to become prime minister three times. He remains the longest serving party leader in modern British politics, heading the Conservative party for twenty-two years from 1846 to 1868. He abolished slavery in the British Empire, established a national system of education in Ireland, was a prominent advocate for the 1832 Reform Act and, as prime minister, oversaw the introduction of the Second Reform Act in 1867. Yet no biographyof Derby, based upon his papers and correspondence, has previously been published. Alone of all Britain's premiers, Derby has never received a full scholarly study examining his policies, personality, and beliefs. Largely airbrushed out of our received view of Victorian politics, Derby has becomethe forgotten prime minister. This ground-breaking biography, based upon Derby's own papers and extensive archive, as well as recently discovered sources, fills this striking gap. It completely revises the conventional portrait of Derby as a dull and apathetic politician, revealing him as a complex, astute, influential, and significant figure, who had a profound effect on the politics and society of his time. As Hawkins shows, far from being an uninterested dilettante, Derby played an instrumental role in directingBritain's path through the historic opportunities and challenges confronting the nation at a time of increasing political participation, industrial pre-eminence, urban growth, colonial expansion, religious controversy, and Irish tragedy. This book is likely not only to change our view of Derby himself but also fundamentally to affect our understanding of nineteenth century British party politics, the history of the Conservative party, and the nature of public life in the Victorian age in general, including some of its foremost figures, such as Robert Peel, Lord John Russell, Lord Palmerston, William Gladstone, and Benjamin Disraeli. Volume II opens with Derby's first period as prime minister in 1852 and takes us through to his death in 1869.

Forfattere
Bibliotekernes beskrivelse The first full biographical study of Lord Derby - the first British statesman to become prime minister three times and the longest serving leader in the history of British party politics. A book that seriously affects the way we think not only about Derby himself, but also about Victorian politics and society more generally. 14 black and white plates