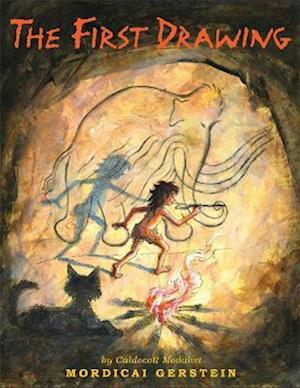 In 1994, the Cave of Chauvet-Pont-d'Arc was discovered, filled with the oldest known drawings in existence at that time, made 30,000 years ago. In that same cave, prehistoric footprints were discovered: those of an 8-year-old child and a wolf. From these astonishing facts, THE FIRST DRAWING was born. In this beautiful picture book, Caldecott Medal-winning author/illustrator Mordicai Gerstein imagines one possible way drawing was invented. The young boy that stars in this story has such a vivid imagination that he sees images everywhere - clouds, stones and smoke look like animals to him. His parents, however, don't share his enthusiasm and wish he would be more down to earth. However the boy cannot contain his enthusiasm and one night grabs a smoky stick and "traces" the image he sees on a cave wall. Lo and behold: the world's first drawing.The First Drawing is a story sure to inspire any artist, young or old, as well as anyone with a dream to do something new and different.