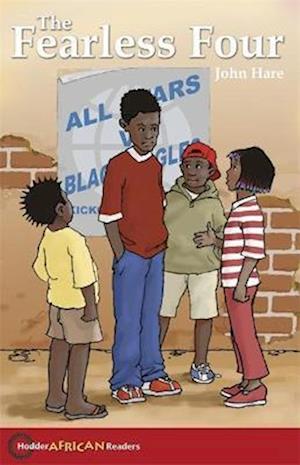 Hodder African Readers are high-interest books designed to appeal to both boys and girls. They are highly motivating adventure and action stories which attract the reader's attention and hold it through the story. Together these titles form a strong, vibrant and attractive supplementary readers series for the African schools.The Fearless Four: Something is going very badly wrong at the Township soccer final. Nobody can understand what is happening to the game - except Taka Taka Tom. He runs into two villains with an evil plot, and soon finds himself in terrible danger. Will Susan, Ken and Tiny be able to save their friend? Find out in the first adventure of the Fearless Four! Other titles in the series include: - The Fearless Four - The Fearless Four: Hijack! - The Fearless Four and the Graveyard Ghost - The Fearless Four and the Smugglers - Twin Trouble - Dead Men's Bones - Sauna and the Drug Pedlars - Time Bomb - The Power of Corruption - God's Case: No Appeal - Magic, Mystery and Mister Prince - One Man, Two Votes