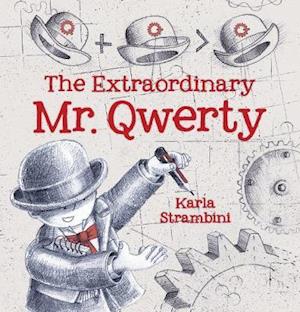 An uplifting story of self-belief, this is the story of Norman Qwerty - whose strange but extraordinaryideas refuse to stay hidden under his hat.In an uplifting story whose intricate, quirky illustrations are teeming with fanciful inventions, Karla Strambini celebrates the individual and encourages creative kids to let their ideas out from under their hats and show the world what amazing things they have to share. Norman Qwerty is a man of many ideas, and none of them is the least bit ordinary. He's quite certain that no one else thinks the way he does, and so he keeps his ideas to himself. But when his ideas get simply too big to hold in, Norman builds the most extraordinary thing! Soon, the beloved Mr Qwerty is never alone (unless he wants to be!), and the world will never be the same.

Forfattere
Bibliotekernes beskrivelse An uplifting story of self-belief, this is the story of Norman Qwerty - whose strange but extraordinary ideas refuse to stay hidden under his hat.