The Evolution of Morphology 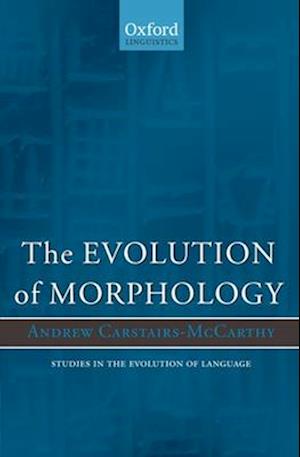 This book considers the evolution of the grammatical structure of words in the more general contexts of human evolution and the origins of language. The consensus in many fields is that language is well designed for its purpose, and became so either through natural selection or by virtue of non-biological constraints on how language must be structured. Andrew Carstairs-McCarthy argues that in certain crucial respects language is not optimally designed. This can beseen, he suggests, in the existence of not one but two kinds of grammatical organization - syntax and morphology - and in the morphological and morpho-phonological complexity which leads to numerous departures from the one-form-one-meaning principle. Having discussed the issue of good and bad design in a wider biological context, the author shows that conventional explanations for the nature of morphology do not work. Its poor design features arose, he argues, from two characteristics present when the ancestors of modern humans had a vocabulary but no grammar. One of these was a synonymy-avoidance expectation, while the other was an articulatory and phonological apparatus that encouraged the development of new synonyms. Morphologydeveloped in response to these conflicting pressures. In this stimulating and carefully argued account Professor McCarthy offers a powerful challenge to conventional views of the relationship between syntax and morphology, to the adaptationist view of language evolution, and to the notion that language in some way reflects 'laws of form'. This fundamental contribution to understanding the nature and evolution of language will be of wide interest to linguists of all theoretical persuasions as well as to scholars in cognitive science andanthropology.

Forfattere
Bibliotekernes beskrivelse This book considers the evolution of the grammatical structure of words in the contexts of human evolution and the origins of language. The author challenges the conventional views of the relationship between syntax and morphology, the adaptationist view of language evolution, and the notion that language in some way reflects 'laws of form'.