The Essence of Chaos

indgår i serie The Jessie and John Danz Lecture Series 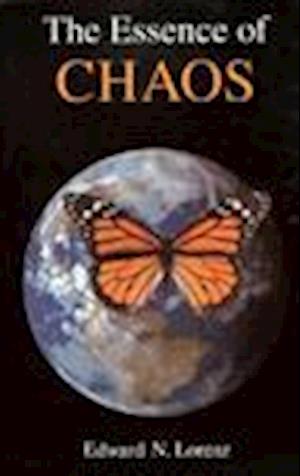 Chaos surrounds us. Seemingly random events -- the flapping of a flag, a storm-driven wave striking the shore, a pinball's path -- often appear to have no order, no rational pattern. Explicating the theory of chaos and the consequences of its principal findings -- that actual, precise rules may govern such apparently random behavior -- has been a major part of the work of Edward N. Lorenz. In The Essence of Chaos, Lorenz presents to the general reader the features of this "new science," with its far-reaching implications for much of modern life, from weather prediction to philosophy, and he describes its considerable impact on emerging scientific fields.

Unlike the phenomena dealt with in relativity theory and quantum mechanics, systems that are now described as "chaotic" can be observed without telescopes or microscopes. They range from the simplest happenings, such as the falling of a leaf, to the most complex processes, like the fluctuations of climate. Each process that qualifies, however, has certain quantifiable characteristics: how it unfolds depends very sensitively upon its present state, so that, even though it is not random, it seems to be. Lorenz uses examples from everyday life, and simple calculations, to show how the essential nature of chaotic systems can be understood. In order to expedite this task, he has constructed a mathematical model of a board sliding down a ski slope as his primary illustrative example. With this model as his base, he explains various chaotic phenomena, including some associated concepts such as strange attractors and bifurcations.

As a meteorologist, Lorenz initially became interested in the field of chaos because of its implications for weather forecasting. In a chapter ranging through the history of weather prediction and meteorology to a brief picture of our current understanding of climate, he introduces many of the researchers who conceived the experiments and theories, and he describes his own initial encounter with chaos.

A further discussion invites readers to make their own chaos. Still others debate the nature of randomness and its relationship to chaotic systems, and describe three related fields of scientific thought: nonlinearity, complexity, and fractality. Appendixes present the first publication of Lorenz's seminal paper "Does the Flap of a Butterfly's Wing in Brazil Set Off a Tornado in Texas?"; the mathematical equations from which the copious illustrations were derived; and a glossary.

Forfattere
Bibliotekernes beskrivelse 'For the personal glimpses of chaos theory development alone, this book is worth-while; for a clear, sharp development of the subject, the book is excellent; and for tying humanistic and scientific considerations together so well, there is a major debt owed to Lorenz.'--Geophysics