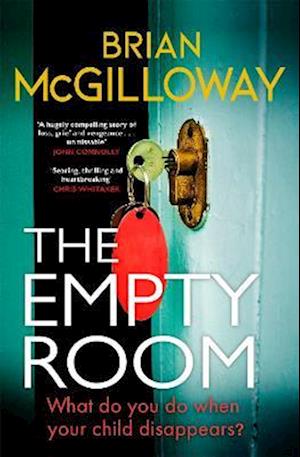 What do you do when your child disappears?'A hugely compelling story of loss, grief and vengeance, The Empty Room is probably the best novel yet by one of our finest mystery writers. Unmissable.' John Connolly'The tension and heartbreak kept me turning the pages' Patricia Gibney'A searing, thrilling and heartbreaking look at life, loss and revenge, expertly handled by a hugely talented storyteller' Chris WhitakerPandora - Dora - Condron wakes one morning to discover her 17-year old daughter Ellie, has not come home after a party.The day Ellie disappears, Dora is alone as her husband Eamon has already left for the day in his job as a long-distance lorry driver. So Dora does the usual things: rings around Ellie's friends... but no one knows where she is. Her panic growing, Dora tries the local hospitals and art college where Ellie is a student - but then the police arrive on her doorstep with the news her daughter's handbag has been discovered dumped in a layby.So begins Dora's ordeal of waiting and not knowing what has become of her girl. Eamon's lack of empathy and concern, Dora realises, is indicative of the state of their marriage, and left on her own, Dora begins to reassess everything she thought she knew about her family and her life. Increasingly isolated and disillusioned with the police investigation, Dora feels her grip on reality slipping as she takes it upon herself to find her daughter - even if it means tearing apart everything and everybody she had ever loved, and taking justice into her own hands. Praise for The Empty Room 'The Empty Room has all the elements of great drama - murder, revenge, sacrifice - along with complex moral questions that will keep you engaged long after the final thrilling page' Martina Murphy'A compulsive, addictive, heart rending read, The Empty Room is a tale of grief and loss, and ultimately redemption, that puts Brian McGilloway at the very top of the game. I could not put it down' Sam Blake'Masterful, humane, compelling, beautifully written, utterly convincing - and without a wasted word' Catherine Kirwan 'The Empty Room is a tense, and at times claustrophic, slow-burner which builds to a devastating conclusion' Claire Allan'A tense thriller' Irish Daily Mail'The Empty Room surely secures Brian's place as one of the best writers out there. . . a thoughtful exploration of a mother struggling with a changed world. . . exceptional' Chris MacDonald Praise for Brian McGilloway 'A compulsive police procedural, but it's so much more than that: thought-provoking, compassionate and beautifully-written. McGilloway is one of the finest crime-writers working today' Ann Cleeves'Blood Ties is one of those rare gems; a beautifully written crime novel that's also brilliantly paced, skillfully plotted and utterly absorbing. Brian McGilloway is, quite simply, a master of his art. Bravo' Jo Spain'Brian McGilloway's police procedurals are a masterclass in crime fictions' Andrea Carter'A clever, engaging and beautifully crafted police procedural' Irish Independent'Some of the very best crime fiction being written today' Lee Child on Bad Blood'This dazzling, labyrinthine debut impresses not only for the authentic depiction of a troubled community and the conflicts of a fallible detective, but also for the intense portrait of the borderlands themselves; as beautiful and terrible as the secrets they keep' Guardian'McGilloway's Borderlands was one of last years most impressive debuts. Does Gallows Lane pass the feared second-novel test? Easily.' The Times'McGilloway skilfully handles the tangled threads of a conspiracy surrounding an old crime, to make a satisfying mystery with an attractive central character.' Sunday Telegraph

Forfattere
Bibliotekernes beskrivelse A gripping, heartbreaking thriller about a mother's search for a lost daughter