The Emergence of Land Markets in Africa

- Impacts on Poverty, Equity, and Efficiency

indgår i serie Environment for Development 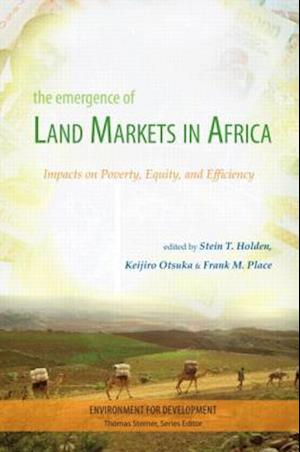 This book is the first systematic attempt to address emerging land markets and their implications for poverty, equity, and efficiency across a number of African countries. The high incidence of poverty and the need for increased agricultural productivity remain acute in rural areas of sub-Saharan Africa, where a lack of secure land rights and a growing scarcity of land relative to the size of the population are becoming increasingly critical issues. Indeed, land issues in the region are high on the international policy agenda. Yet our knowledge about land tenure security and other rural factor markets (such as labor, oxen, manure, purchased inputs, and credit) is far from adequate to formulate sensible policies. The case studies in the book show that, while land markets and especially informal markets have been rapidly emerging in densely populated parts of Africa - and have generally been to the benefit of the poor--their functions remain imperfect. This is due to policy-induced tenure insecurity and the fragmentation of agricultural land. Applying rigorous quantitative analyses, the book provides a basis for taking into account the role of land markets in national land policies. All too often, the authors argue, land policies have been extreme, either prohibiting all land transactions or giving unrestricted freehold rights to a small elite at the expense of the poor. From the long experience in Asia, it is known that such policies are detrimental to both production efficiency and equity of land use. The authors argue that future policies in Africa should work with the markets. Regulations should be imposed only with careful testing that they are having the intended effects. The Emergence of Land Markets in Africa is a resource for teaching in developed and developing countries, as it provides both comprehensive reviews of the literature and detailed case studies. It is intended to facilitate the dialogue between researchers and policymakers, as well as inspire researchers to go further in their investigations and build an even stronger basis for good policies. The Emergence of Land Markets in Africa is the first publication in the new Environment for Development (EfD) book series. EfD books focus on research and applications in environmental and natural resource economics as they are relevant to poverty reduction and environmental problems in developing countries. The EfD book series is part of the EfD initiative. (www.environmentfordevelopment.org)

Forfattere
Bibliotekernes beskrivelse The high incidence of poverty and the need for increased agricultural productivity remain acute in rural areas of sub-Saharan Africa. This book addresses the land markets and their implications for poverty, equity, and efficiency across various African countries.