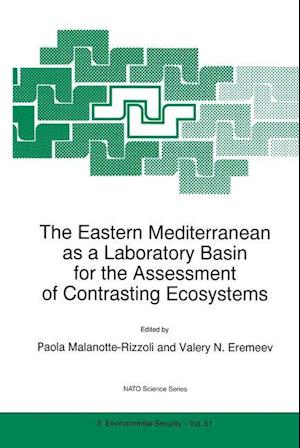 This book is the outcome of a NATO Advanced Research Workshop on "The Eastern Mediterranean as a laboratory basin for the assessment of contrasting ecosystems" that was held in Kiev, Ukraine, March 23-27, 1998. The scientific rationale of the workshop can be summarized as follows. The Eastern Mediterranean is the most nutrient impoverished and oligotrophic large water body known. There is a well-defined eastward trend in nutrient ratios over the entire Mediterranean that starts at the Gibraltar Straits and, through the western basin, proceeds to the Ionian and Levantine Seas. Supply of nutrients to the entire Mediterranean is limited by inputs from the North Atlantic and various river systems along the sea. The unique feature of the Mediterranean is the presence of an eastward longitudinal trend in available nitrate/phosphate ratios. This apparently induces a west-to-east variation in the structure of the pelagic food web and trophic interactions. In this context the Mediterranean, and in particular its Eastern basin, provides probably a unique platform to explore the hypotheses related to the suggested phosphate-limitation on production and to the shift between "microbial" and "classical" modes of operation of the photic food web. The major exception of the overall oligotrophic nature of the Eastern Mediterranean is the highly eutrophic system of the Northern Adriatic Sea. Here, during the last two decades the discharges of the northern rivers (especially of the Po), together with municipal sewage, have led to a very marked increase of nutrients and subsequent imponent eutrophication events.