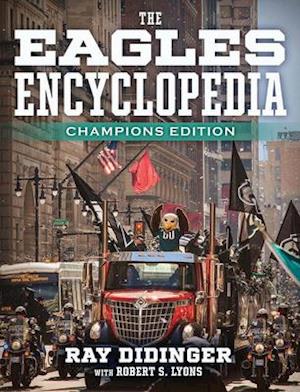 Ray Didinger, like every die-hard Eagles fan, has been waiting since the 1960 NFL Title for the Birds to win the Super Bowl. In this "Champions Edition" of The Eagles Encyclopedia, beloved Eagles commentator Didinger celebrates his team and their remarkable, against-all-odds season that ended at Super Bowl LII, where they claimed victory over the Patriots in Minnesota. Didinger updates his best-selling book The Eagles Encyclopedia with the departure of Coach Chip Kelly and the dawn of the Doug Pederson era. He provides a new chapter on the 2017-18 season and postseason. And he includes dozens of new player, coach, and front-office profiles as well as Hall of Fame updates on 2018 inductees Brian Dawkins and Terrell Owens. But wait, there's more! *An all-new 16-page color insert highlights key moments on the road to the Super Bowl*Iconic photos old and new, from Concrete Charlie Bednarik's tackle of Frank Gifford to Nick Foles and the Philly Special*More than 100 new photos from the recent season as well as from earlier periods in the Eagles' storied historyTheEagles Encyclopedia: Champions Edition is more than a keepsake of a championship season. It is a book about a city and a team and the emotion that binds them.