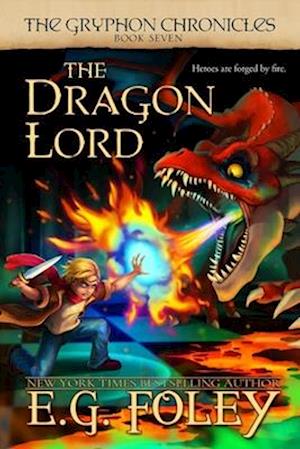 NY Times Bestselling Author E.G. Foley brews up a magical potion for fantasy readers of all ages Take a dash of Harry Potter and a splash of Oliver Twist, add a pinch of steampunk and a sprinkle of Victorian fairy lore, and what do you get? The Gryphon Chronicles A rollicking fantasy adventure series that's as much fun for grownups as it is for kids. It has begun. A fiery, unprovoked attack. War between mages and warlocks erupts. The Order stands on the precipice of destruction, while a deadly new leader rises to fight for control of the sinister Dark Druid brotherhood. For Jake Everton, the valiant young Earl of Griffon, and his brave band of friends, the stakes could not be higher. On their own, hunted by maleficent enemies, the kids must rely on one another (and Red the Gryphon) more than ever to survive. But evil has its eye on Jake, and the mysterious prophecy swirling over his head leaves him wondering if he really could be the one to destroy the dragon lord and his ruthless followers-or if the darkness rising on all sides will swallow him up... Don't miss this sweeping tale of good versus evil in the next pulse-pounding installment of The Gryphon Chronicles, where the fate of the human and magical worlds alike may rest upon the courage of the roguish boy hero, his fierce pet Gryphon, and the gutsy young adventurers willing to follow him to the gates of Hades itself. "A wonderful novel in the same vein as Harry Potter, full of nonstop action, magical creatures, and the reality that was Queen Victoria's England." The Reading Caf The Gryphon Chronicles

Book 5 - SECRETS OF THE DEEP