The Diary of Nannie Haskins Williams

indgår i serie Voices Of The Civil War 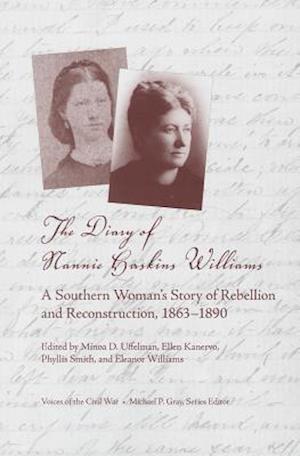 In 1863, while living in Clarksville, Tennessee, Martha Ann Haskins, known to friends

and family as Nannie, began a diary. "The Diary of Nannie Haskins Williams: A Southern

Woman's Story of Rebellion and Reconstruction, 1863-1890" provides valuable insights into

a slaveholding society. The war ended this prospect, and her life was forever changed.

Though this is the first time the diaries have been published in full, they are well known

among Civil War scholars, and a voice-over from the wartime diary was used repeatedly

the war. Amid school assignments, young friendship, social events, worries about her

about battles, neighbors wounded in combat, U.S. Colored troops, and lawlessness in the

the war was over--not in battles, but to maintain their lives in a war-torn community.

Though numerous women's Civil War diaries exist, Nannie's is unique in that she also

in the post-Reconstruction South. Nannie's diary may record only one woman's

experience, but she represents a generation of young women born into a society based

during the Civil War.

Phyllis Smith is retired from the U.S. Army and currently teaches high school science in