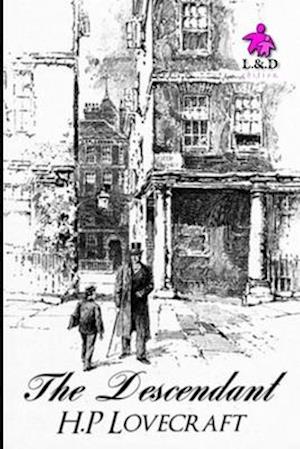 The Descendant (+Biography and Bibliography) (6X9po Glossy Cover Finish): " Writing on what my doctor tells me is my deathbed, my most hideous fear is that the man is wrong. I suppose I shall seem to be buried next week, but...In London there is a man who screams when the church bells ring. He lives all alone with his streaked cat in Gray's Inn, and people call him harmlessly mad. His room is filled with books of the tamest and most puerile kind, and hour after hour he tries to lose himself in their feeble pages. All he seeks from life is not to think. For some reason thought is very horrible to him, and anything which stirs the imagination he flees as a plague. He is very thin and grey and wrinkled, but there are those who declare he is not nearly so old as he looks. Fear has its grisly claws upon him, and a sound will make him start with staring eyes and sweat-beaded forehead. Friends and companions he shuns, for he wishes to answer no questions. Those who once knew him as scholar and aesthete say it is very pitiful to see him now. He dropped them all years ago, and no one feels sure whether he left the country or merely sank from sight in some hidden byway. It is a decade now since he moved into Gray's Inn, and of where he had been he would say nothing till the night young Williams bought the Necronomicon. "