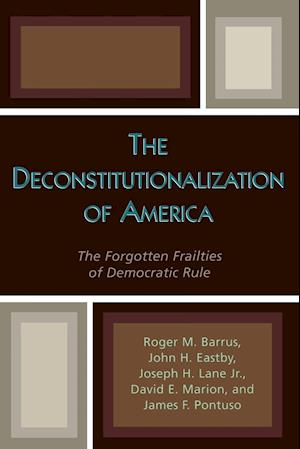 In The Deconstitutionalization of America: The Forgotten Frailties of Democratic Rule, Roger M. Barrus and his coauthors embark on a discussion of American democracy from the nineteenth century to the present day. The present paradox democracy finds itself in can be summed up as 'the best of times and the worst of times.' Democracy, at its best, has triumphed throughout the world. It is the authors contention that this same success represents the potential for its undoing: with all governments claiming to be democratic, modern democrats-and this includes just about everyone-find it difficult if not impossible to understand the nature and problems of democracy. Since most everyone lives within a democratic horizon, they have nothing to compare democracy to and no one to point out its faults. In this way, they are hampered in dealing with their social and political problems, some of which may be the result of contradictions inherent in the democratic principle itself. The solution to democracy's ills might not be, after all, more democracy.