The Decline Of The World Communist Movement

- Moscow, Beijing, And Communist Parties In The West 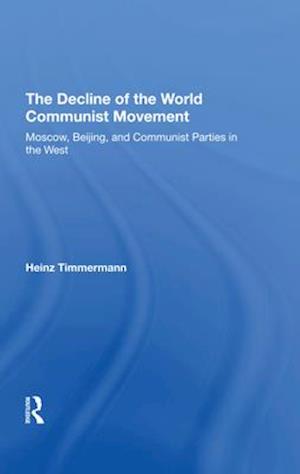 International Communism today is split on a number of ideological and political issues and is incapable of the kind of unified action implied by the term "movement.aEURO So argues Heinz Timmermann in this assessment of the current state of world Communism. Dr. Timmermann discusses the historical concept of a world Communist movement in connection with the USSR and China. Focusing on Communism in the West, he examines such diverse groups as the Communist parties in Italy, France, Portugal, Cyprus, Chile, and Japan. Communist parties in the West are increasingly adjusting their policies to better fit their own cultures, and the author links this independence to the emphasis the Soviet Union's Communist Party has been placing on the specifically Russian character of the October Revolution and Soviet state interests. Apparently, Moscow is now showing some flexibility in its response to tendencies toward differentiation and pluralism within the system of Communist parties. Gorbachev is less concerned with ideological orthodoxy than with Communists effectively supporting Soviet foreign policy. The author argues that by acceding to the concept of "unity in diversity,aEURO Gorbachev is signaling that the Soviet leadership is willing to look beyond the myth of a world Communist movement.