indgår i serie The Aberystwyth Mysteries 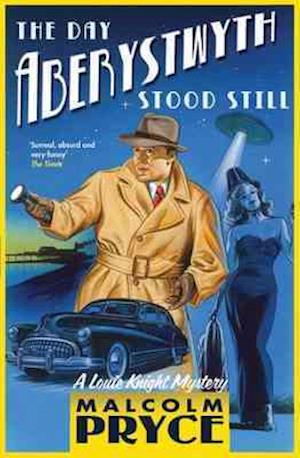 It's May in Aberystwyth and the mayoral election campaign is underway. Private detective Louie Knight has just received a visit from a mysterious stranger called Raspiwtin asking him to track down a dead man called Iestyn Probert. Originally hanged for his part in the infamous raid on the Coliseum cinema, Iestyn Probert was later seen alive and well and boarding a bus to Aberaeron. Did he escape the hangman's noose? Or could there be some truth to the rumours that he was resuscitated by aliens? Now, as strange lights are spotted in the sky above Aberystwyth and a farmer claims to have had a close encounter with a lustful extraterrestrial, Iestyn Probert has been sighted once again. But what does Raspiwtin want with him? And why does Louie's investigation arouse unwelcome interest from a shadowy government body and a dark-suited man in a black 1947 Buick?

Forfattere
Bibliotekernes beskrivelse In the latest hilarious instalment of Malcolm Pryce's Aberystwythmysteries, Wales's answer to Philip Marlowe faces an axe-wieldingrabbit-hugger, a green-eyed beauty who answers to the name Miaow, and a casethat is out of this world