The Dawn of Modern Warfare

- History of the Art of War, Volume IV (Volume IV)

indgår i serie History of the Art of War 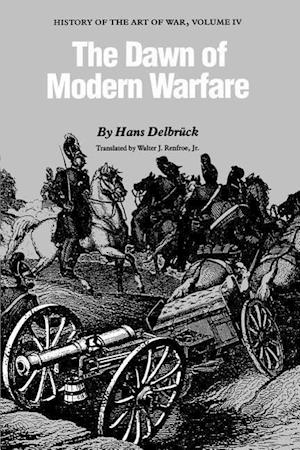 By the fifteenth century the Swiss method of warfare, in which disciplined foot soldiers fought in tightly formed units, was being imitated. The Germans and Spanish took notice when in 1479 Archduke Maximilian and his victorious Flemish infantrymen used their long pikes to prevent the mounted French knights from charging. The era of modern warmaking was at hand. In this last volume of his classic history of the art of war, Hans Delbruck considers new developments: the use of gunpowder, the invention of firearms, and the employment of noisy large cannon that shot stone and, later, iron balls. After reviewing the establishment of a European infantry, Delbruck discusses the transformation of loose confederations of knights into cavalry (well developed by the last Huguenot wars), the organization of fighting mercenaries (followed by wives and prostitutes), and the changing of mercenary bands into standing armies.The Dawn of Modern Warfare is colored by larger-than-life personalities: Niccolo Machiavelli, the theoretician of the new art of war; Maurice of Orange, renovator of the art of drill and father of military discipline; Gustavus Adolphus of Sweden, perfecter of infantry tactics; Oliver Cromwell of England, reorganizer of a citizen militia into a professional army; and Frederick the Great and Napoleon Bonaparte, military strategists par excellence.

Forfattere
Bibliotekernes beskrivelse Considers developments including the use of gunpowder, the invention of firearms and iron balls. After reviewing the establishment of a European infantry, this work discusses the transformation of loose confederations of knights into cavalry, the organization of fighting mercenaries, and the changing of mercenary bands into standing armies.