The Daughters of George III 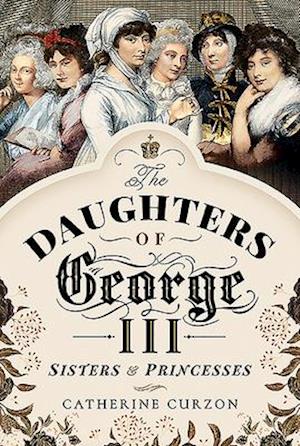 In the dying years of the 18th century, the corridors of Windsor echoed to the footsteps of six princesses. They were Charlotte, Augusta, Elizabeth, Mary, Sophia, and Amelia, the daughters of King George III and Queen Charlotte of Mecklenburg-Strelitz. Though more than fifteen years divided the births of the eldest sister from the youngest, these princesses all shared a longing for escape. Faced with their father's illness and their mother's dominance, for all but one a life away from the seclusion of the royal household seemed like an unobtainable dream.

The six daughters of George III were raised to be young ladies and each in her time was one of the most eligible women in the world. Tutored in the arts of royal womanhood, they were trained from infancy in the skills vial to a regal wife but as the king's illness ravaged him, husbands and opportunities slipped away.

Yet even in isolation, the lives of the princesses were filled with incident. From secret romances to dashing equerries, rumors of pregnancy, clandestine marriage and even a run-in with Napoleon, each princess was the leading lady in her own story, whether tragic or inspirational. In The Royal Nunnery: Daughters of George III, take a wander through the hallways of the royal palaces, where the king's endless ravings echo deep into the night and his daughters strive to be recognized not just as princesses, but as women too.