The Correspondence of Henry and Sarah Fielding 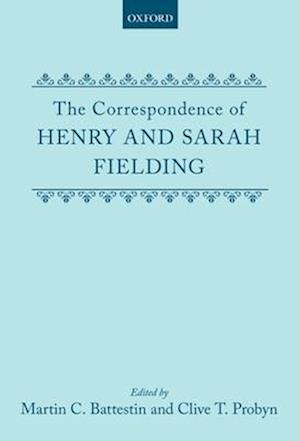 Important discoveries in private and public archives have recently brought to light many new letters by Henry Fielding (1707-54) and by his sister, the novelist and classicist Sarah Fielding (1710-68). Published here for the first time is their entire extant correspondence, edited with an Introduction and explanatory annotations - 77 letters from and to Henry Fielding written over the years 1727 to 1754, and 33 letters from and to Sarah Fielding written from 1749 to1767.The collection illuminates Henry Fielding's activities as author, lawyer, and magistrate; and it is valuable as well for the light it throws on his character and personal relationships. Fielding scholars are already acquainted with the important letters to his cousin Lady Mary Wortley Montagu, to his rival Samuel Richardson, to his friend George Lyttelton, and to his famous half-brother John Fielding, the latter written on the sad occasion of his final voyage to Lisbon. In this volume theywill also find Fielding's correspondence with his great patron, the Duke of Bedford, and his agents - letters relating to Fielding's stewardship of the New Forest and to his appointments to the magistracy. The heart of this present collection, however - Fielding's correspondence with his closestfriend, James `Hermes' Harris - is completely new. Never before published, the Harris letters comprise the finest extant examples of Fielding's epistolary correspondence, a kind of familiar writing he practised reluctantly, but well.The Harris papers are equally valuable for what they reveal of Sarah Fielding's literary and scholarly interests and her relationship with her brother. Other letters in the collection - several also published here for the first time - will serve to clarify her friendships with Richardson, Garrick, and Elizabeth Montagu. Included in the Appendix are a half-dozen letters from members of the family that will be of interest to biographers of Henry and Sarah.

Forfattere
Bibliotekernes beskrivelse A scholarly edition of the correspondence of Henry and Sarah Fielding. The edition presents an authoritative text, together with an introduction, commentary notes, and scholarly apparatus. 8 pp halftone plates