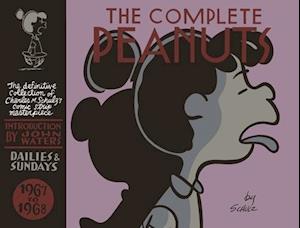 As we rush toward the end of Peanuts' second full decade, Snoopy finds himself almost completely engrossed in his persona as the World War I Flying Ace.Still, Snoopy looms large, so this volume (a particularly Snoopy-heavy one) sees him arm-wrestling Lucy as the "Masked Marvel" and then taking off for Petaluma for the national arm-wrestling championship; impersonating a vulture and a "Cheshire Beagle"; enjoying golf and hockey; attempting a jaunt to France for an ice-skating championship; running for office on the "Paw" ticket; being traded to Peppermint Patty's baseball team, then un-traded and installed as team manager by a guilt-ridden Charlie Brown; as well as dealing with the return of his original owner, Lila.Peppermint Patty, working toward her ascendancy as one of the major Peanuts players in the 1970s and 1980s, also has several major turns, including a storyline in which she's the tent monitor for three little girls (who call her "Sir" - a joke Schulz would pick up later with Peppermint Patty's friend Marcie). Linus's flippant comment to his Gramma that he'll kick his blanket habit when she kicks her smoking habit backfires; Lucy bullies Linus, pesters Schroeder, and organizes a "crab-in"; plus Charlie Brown copes with Valentine's Day depression, the Little Red-Haired Girl, the increasingly malevolent kite-eating tree, and baseball losses. In other words: Vintage Peanuts!All this, plus an introduction by beloved transgressive filmmaker John Waters and award-winning design by Seth.

Forfattere
Bibliotekernes beskrivelse Classic Peanuts, with an introduction by John Waters Throughout