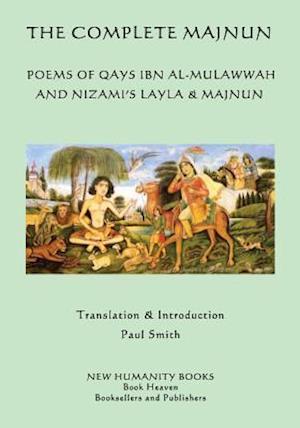 THE COMPLETE MAJNUN POEMS OF QAYS IBN AL-MULAWWAH AND NIZAMI'S LAYLA & MAJNUN Translation & Introduction Paul Smith Majnun was a real person Qays (Majnun='madman') was a youth, a Bedouin poet in the seventh century of the Bani Amir tribe in the Najd desert in Arabia. He fell in love with Layla from the same tribe whom he was denied. (It is said that Shakespeare was inspired by their tale for Romeo & Juliet from their tragic love story). His rpoetry was composed before and some after his descent into love-madness (mast). Here, in the form of the qit'as in which they were composed, is the largest collection of his immortal poems translated into English. Nizami's famous telling of their tale came from these poems and other sources. It is impossible to underestimate the effect of Nizami's 'Layla and Majnun' on the world over the past 800 years. Many poets throughout this period have copied or been influenced by his story of the young lovers. Many Master-Poets besides Ibn Arabi, 'Attar, Rumi, Sadi, Hafiz and Jami have quoted from him or like him have used the story of the desperate lovers to illustrate how human love can be transformed into divine love through separation and longing. It is said that no one has painted a more perfect picture of women in Persian Literature than Nizami. The correct rhyme-structure of this long masnavi epic poem is here while retaining the beauty of the poetry, the mystical meaning and simplicity of the form. Large Format Paperback 7" x 10" Pages 267 COMMENTS ON PAUL SMITH'S TRANSLATION OF HAFIZ'S 'DIVAN'. "It is not a joke... the English version of ALL the ghazals of Hafiz is a great feat and of paramount importance. I am astonished." Dr. Mir Mohammad Taghavi (Dr. of Literature) Tehran. "Superb translations. 99% Hafiz 1% Paul Smith." Ali Akbar Shapurzman, translator and knower of Hafiz's Divan off by heart. "Smith has probably put together the greatest collection of literary facts and history concerning Hafiz." Daniel Ladinsky (Penguin Books author). Paul Smith is a poet, author and translator of many books of Sufi poets of the Persian, Arabic, Urdu, Turkish, Pashtu and other languages including Hafiz, Sadi, Nizami, Rumi, 'Attar, Sana'i, Jahan Khatun, Obeyd Zakani, Mu'in, Amir Khusrau, Nesimi, Kabir, Anvari, Ansari, Jami, Khayyam, Rudaki, Yunus Emre, Lalla Ded, Bulleh Shah, Mahsati and others, and his own poetry, fiction, plays, biographies, children's books and screenplays. www.newhumanitybooks.com