The Communist Movement since 1945

indgår i serie History of the Contemporary World 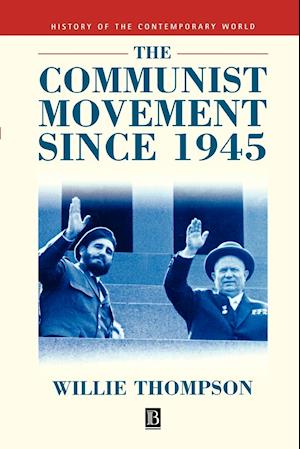 This book considers the historical role of the communist movement in its global context. It covers both the ruling and non-ruling communist parties, from Europe to Asia and Latin America. It provides an overview of political developments during the period since 1945, and examines the ideology and culture of the movement. The book opens with an assessment of the immediate aftermath of the Second World War. This was a time characterized by the spread of Soviet influence in Europe, communist-inspired colonial revolt, the Cold War and the use by Stalin of terror as an instrument of rule. The author then considers such issues as the process of destalinization after 1953, the hopes raised by Soviet technological breakthroughs, the pressures from the West in a bipolar world, and the schism in the communist world following the dispute between Soviet and Chinese leaderships. The second part of the book examines the successes and failures of the various communist regimes and their impact on the non-ruling communist parties. It also considers the spread of communist influence in the developing world.The book charts the breakdown in the Soviet bloc from the 1980s and, finally, it assesses the extent to which the collapse of communism by the 1990s was inevitable.

Forfattere
Bibliotekernes beskrivelse This study examines the political and ideological development of the leading revolutionary movement of the century, from the establishment following World War II of a communist bloc in place of a single isolated state, to the final unexpected collapse of its Soviet component.