Comics of R. Crumb: Underground in the Art Museum 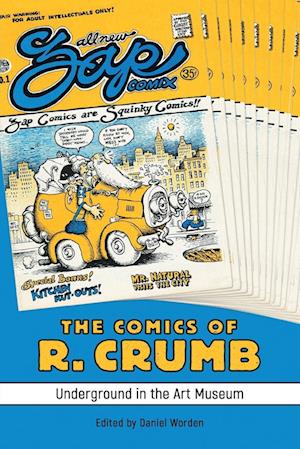 Contributions by Jos Alaniz, Ian Blechschmidt, Paul Fisher Davies, Zanne Domoney-Lyttle, David Huxley, Lynn Marie Kutch, Julian Lawrence, Liliana Milkova, Stiliana Milkova, Kim A. Munson, Jason S. Polley, Paul Sheehan, Clarence Burton Sheffield Jr., and Daniel Worden From his work on underground comix like Zap and Weirdo, to his cultural prominence, R. Crumb is one of the most renowned comics artists in the medium's history. His work, beginning in the 1960s, ranges provocatively and controversially over major moments, tensions, and ideas in the late twentieth and early twenty-first centuries, from the counterculture and the emergence of the modern environmentalist movement, to racial politics and sexual liberation. While Crumb's early work refined the parodic, over-the-top, and sexually explicit styles we associate with underground comix, he also pioneered the comics memoir, through his own autobiographical and confessional comics, as well as in his collaborations. More recently, Crumb has turned to long-form, book-length works, such as his acclaimed Book of Genesis and Kafka. Over the long arc of his career, Crumb has shaped the conventions of underground and alternative comics, autobiographical comics, and the "graphic novel." And, through his involvement in music, animation, and documentary film projects, Crumb is a widely recognized persona, an artist who has defined the vocation of the cartoonist in a widely influential way. The Comics of R. Crumb: Underground in the Art Museum is a groundbreaking collection on the work of a pioneer of underground comix and a fixture of comics culture. Ranging from art history and literary studies, to environmental studies and religious history, the essays included in this volume cast Crumb's work as formally sophisticated and complex in its representations of gender, sexuality, race, politics, and history, while also charting Crumb's role in underground comix and the ways in which his work has circulated in the art museum.