The Color of Lies 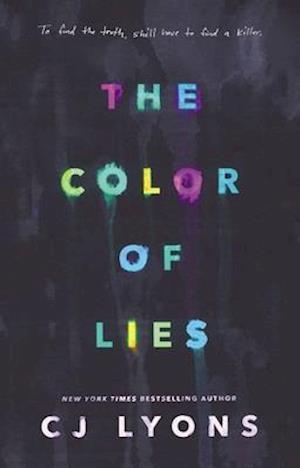 A gripping young adult suspense novel drenched in color, mystery, and lies. New York Times and USA Today bestselling author CJ Lyons grabs you and won't let go, keeping you guessing until the very last page of The Color of Lies.When you can see emotions in color, motives become black and white. Even murder.Ella Cleary has always had an eye for the truth. She has synesthesia, which means she is able to read people via the waves of colors that surround them. Her unique gift has led her to trust very few people outside her family since her parents died in a fire. So when a handsome young journalist appears with no colors surrounding him at all, her senses go on high alert.But while Alec is a mystery, Ella feels a connection to him she can't ignore. Something about him feels familiar, and she is able to talk with him in ways she can't with anyone else. Then just as feelings develop between them, Alec drops a bombshell: he believes her parents' deaths were no accident. And she may be in more danger than she's ever realized.Soon Ella doesn't know who she can trust or even who she really is. As family secrets begin to unravel and fact and fiction collide, it becomes clear that the only way for Ella to learn the truth about her past is to find a killer.The Color of Lies:YA suspense with themes of mystery, romance, and friendshipBy New York Times and USA Today bestselling thriller writer CJ Lyons, whose adult suspense novels have sold over 2 million copies in print and digitalFeatures a protagonist with synesthesia, which can allow people to see sounds, taste words, or feel sensations on their skin associated with certain scentsPerfect for fans of E. Lockhart, Karen M. McManus, and Jennifer Brown