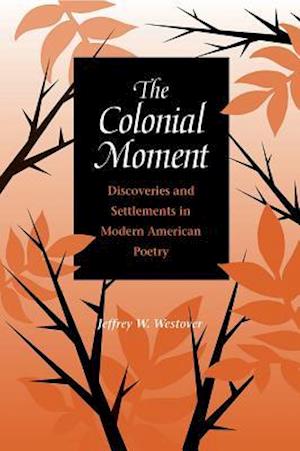 Explorers, colonists, native peoples-all played a role in early American settlement, and the legacy they left was a turbulent one. During the first three decades of the twentieth century, as the United States asserted itself as a world power, poets began to revisit this legacy and to create their own interpretations of national history. In The Colonial Moment, Jeffrey Westover shows how five major poets-Marianne Moore, William Carlos Williams, Robert Frost, Hart Crane, and Langston Hughes-drew from national conflicts to assess America's new role as world leader. Sensitive to the nation's memory of colonial brutality, these poets mingled their pride in America with moral protest against racism. Some identified a dark side to the nation's history, particularly in the conflicts between white pioneers and Native Americans, that haunted their otherwise confident celebrations of patriotism. Others used poetry as a vehicle of discovery to challenge existing historical accounts or to criticize the failures of American democracy. Investigating these five major writers in terms of their cultural and political moment, Westover demonstrates how they dramatized the process of nation-building. Colonization inevitably results in a sense of displacement. Each of these five poets struggled with such cultural alienation-especially those who belonged to a racial, sexual, or gender minority. They endeavored to unite their voices in a "vocabulary of the national," a search to define the concept of "we" that would encompass all modern readers while recognizing those whom previous generations had dismissed. In this way, each writer hoped to redeem the country's losses symbolically through language.