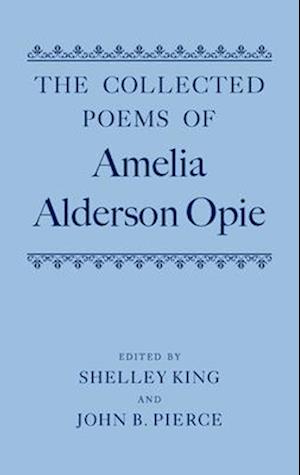 The Collected Poems of Amelia Alderson Opie offers the first collected, scholarly edition of poetical writings of one of the most celebrated women writers of the early nineteenth century. It brings together poems from a variety of sources, including three volumes of poetry assembled by the author, annual anthologies, periodicals, songs, manuscripts, fictional tales, broad sheets, separately published pamphlets, and unpublished private correspondence. Thepoems included cover the entire range of Opie's long career, starting with her earliest surviving works from the 1790s and extending through her last poems in 1850. The arrangement proposed for this edition gives an overall sense of Opie's development from her early experiments with short lyrics appearing inThe Annual Anthology, The Cabinet, and The European Magazine to her first large-scale success with Poems and the publication of a number of song lyrics, to the longer narrative poems in The Warrior's Return to the final phase of her publishing life after officially joining the Quakers in 1825 - the appearance of Lays for the Dead, a sequence of elegies for both private and public figures. Until now, Opie has been known primarily through afew frequently anthologized poems focusing on her response to the war with France and her support of the abolition movement. The Collected Poems offers the opportunity to explore more fully the contribution made to literary culture in the period by a woman who throughout her life used poetry as the basis of affective connection with herworld.

Forfattere
Bibliotekernes beskrivelse The Collected Poems of Amelia Alderson Opie is the first annotated scholarly edition of the poetic corpus of Amelia Opie (1769-1853), a woman writer who made a significant contribution to literary culture in Britain during the Romantic and early Victorian periods. eleven black-and-white halftones