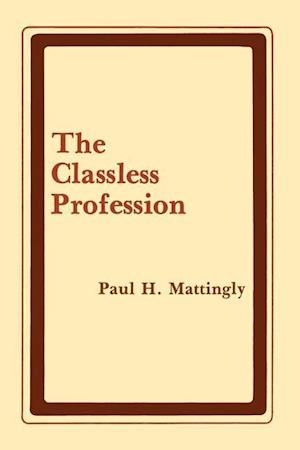 "Professor Paul H. Mattingly's The Classless Profession: American Schoolmen of the Nineteenth Century is unquestionably a major contribution to the history of American education. It rests on a thorough command of the scholarship of the field and on a shrewd and original analysis of a great body of primary materials, many of which have not previously been carefully exploited." Merle Curti, University of Wisconsin, Pulitzer Prize Winner "Mattingly's study should be read by everyone interested in the development of the public schools and of the teaching profession, and especially by those whose criticism of today's schools derives from a belief that things were much better in the 1870s than the 1970s." Albert Shanker, United Federation of Teachers "Mattingly's book is superlative in its exploration of the distinctive cultural qualities of the teaching profession." Joseph Kett, Review of American History "What remains solid and permanently useful. . .is his intellectual history of early leaders - the best such study to date." David Tyack, Journal of American History Mattingly is at his best describing the variegated experiences of early teachers as they sought to transform teaching from a haphazard, seasonal occupation to a developing profession. He explores the dynamics of career choice for teachers with subtlety and insight." Julia C. Wrigley, American Education Research Journal The Classless Profession traces the history of the special pride teachers took in the depoliticized image of their work. This image of a classless profession, one which preferred no class ideology not advanced any social group over another, necessitated costs which teachers then and since have often ignored. In an effort to describe the process of constructing this profession - its images, behavioral routines and institutional structures - this study also assesses the historical forces which actually have favored certain social groups and certain educational ideologies over others. This eye-opening work is unique in that it features interdisciplinary methodology which draws on sociological, demographical, and historical methodologies and delineates career-line analyses of several generations of schoolmen. It should prove vital reading to all those involved in the profession as well as the process of education - i.e. teachers, sociologists, social and educational historians, school planners and educational policy-makers, unionists and administrators alike.