The Chronicles of Jack McCool - The Orb of Eternal Fire 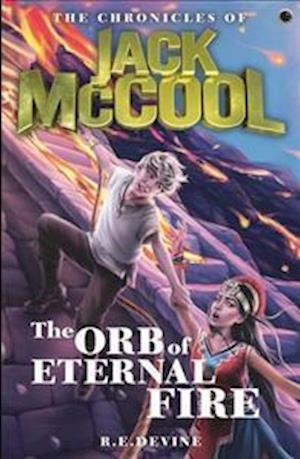 The clans secret encampment has been discovered and burnt to the ground by the evil High King Goll. All hope seems lost as Jack, Finn and the clansmen who escaped Golls clutches desperately try to stay one step ahead of Eireanns wicked ruler by hiding in the Forest of Roann. There, they hatch a plan to rescue their kidnapped friends from the Palace of Tara where they are trapped and find Finns wife, Ruskalya who has mysteriously disappeared. Not only this but they must help Jack retrieve the sixth gemstone destined for the magical Amulet of Athlone that he wears around his wrist. This last enchanted jewel is all that our school boy hero needs to break the ancient curse that imprisons Finns mother and keeps Eireann under Golls rule. Now only a single banshee stands in his way to fulfill his destiny as Prince of Tara but that banshee is Serpentia, the most feared and dangerous of her kind. While Jack prepares to confront his deadly enemies, he hears that his old friend, Ra, is in desperate need of his help. Since last they met, Ra has been sold into slavery and sent from her home in Kemet to ancient Mexico to serve the Aztec queen. Worse still, Jack discovers the queens sons, fuelled by jealousy, have hatched a dastardly plan for Ra with the aid of the Aztec high priest. Torn between facing the evil pair who have haunted Eireann for so long and rescuing his friend, Jack decides to risk everything including the success of his final challenge and begs Finn to join him in one last quest. The sixth and final installment of The Chronicles of Jack McCool, is full of intrigue, mystery and danger as Jack battles to do whats right by his friends and unravel the secrets of the Orb of Eternal Fire that holds the key to Ras freedom while still struggling to fulfill his destiny; all in the shadow of a fiery volcano thats threatening to explode. Jacks trademark humour and the growing wisdom hes gained from his adventures help him in his efforts but will all his hard work and bravery pay off or will Jack have to make the ultimate sacrifice in order to succeed?