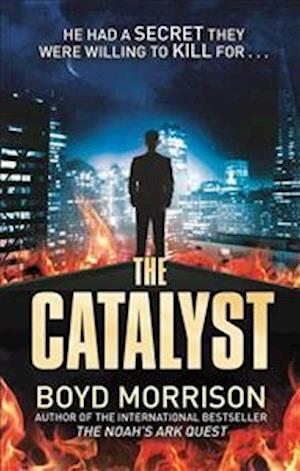 'Kevin, the same men who killed Stein are after me...'When Doctor Michael Ward dies in a suspicious fire, his student Kevin Hamilton is convinced it was no accident. The young Ph.D. student received a cryptic email from Ward just before the fatal blaze, warning him that their recent and supposedly failed experiment had actually brought about one of the most important discoveries of the century: a chemical process worth billions, with the potential to destroy lucrative global industries. Along with his girlfriend, Kevin faces an urgent race to escape some extremely dangerous assassins. He must use all of his wits to protect his top-secret discovery and to prevent a conspiracy that will silence him for ever. And time is running out...This is the classic action-packed thriller from the internationally bestselling author of The Noah's Ark Quest.**This book was originally published as The Adamas Blueprint**

Forfattere
Bibliotekernes beskrivelse He had a secret they were willing to kill for...