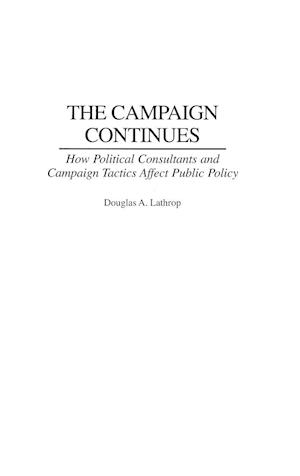 Lathrop analyzes the use of political consultants and campaign tactics and shows their impact on the development of public policy. Major pieces of legislation often are accompanied by a sophisticated marketing effort, complete with polling, television commercials, and direct mail. As Lathrop suggests, governing has taken on all the trappings of a full-time campaign.As political consultants become more prominent figures in congressional campaigns, they are simultaneously expanding their sphere of influence into the policy-making realm. No longer relegated to the limited confines of candidate-campaigns, many consultants remain principal advisors to politicians once in office. In addition, Lathrop shows how consultants are insinuating themsleves into the legislative process by managing single-issue, grassroots movements on behalf of trade associations, corporations, and advocacy groups in an effort to affect legislation as it moves through Congress.As Lathrop makes clear, the flowering of post-electoral consulting is due, in part, to the advent of the permanent campaign. Major policy initiatives have taken on the trappings of campaigns as politicians and interest groups court the public for support. Blurring the distinction between campaigning and governing places a premium on the specialized knowledge consultants possess in fields such as polling, mass marketing, and media relations. Post-electoral consulting raises important questions about the efficacy of applying campaign tactics in a governing context, the nature of political discourse in a mass media polity, about the role of unelected figures in a representative democracy, and the presence of elite bias in interest group activity. Lathrop evaluates these questions by chronicling consultant activity during the Clinton health care reform effort, the transformation of the Contract with America, and the legislative battle to add a prescription drug benefit to Medicare in 1999-2000.