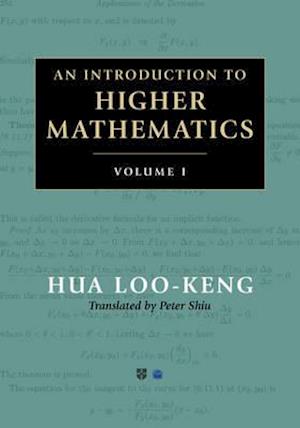 The self-taught mathematician Hua Loo-Keng (1910-1985) has been credited with inspiring generations of mathematicians, while his papers on number theory are regarded as some of the most significant contributions made to the subject during the first half of the twentieth century. An Introduction to Higher Mathematics is based on the lectures given by Hua at the University of Science and Technology of China from 1958. The course reflects Hua's instinctive technique, using the simplest tools to tackle even the most difficult problems, and contains both pure and applied mathematics, emphasising the interdependent relationships between different branches of the discipline. With hundreds of diagrams, examples and exercises, this is a wide-ranging reference text for university mathematics and a testament to the teaching of one of the most eminent mathematicians of his generation.

Forfattere
Bibliotekernes beskrivelse Hua Loo-Keng (1910-1985) is remembered as one of the leading mathematicians of his generation. These volumes, containing both pure and applied mathematics, are based on his lectures at the University of Science and Technology of China. With hundreds of diagrams, examples and exercises, this is a wide-ranging reference text for university mathematics. 2 Items Contains 2 Hardbacks