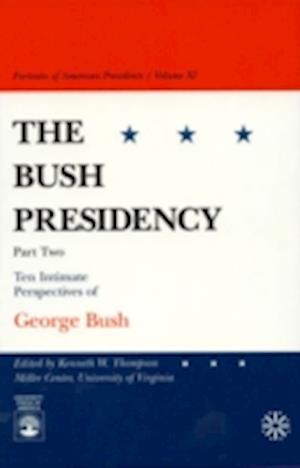 Copublished with The Miller Center of Public Affairs, The Bush Presidency - Part II, discusses the impressive accomplishments at the beginning of the end of the presidency of George Bush, presenting these events for placement in history. This collection begins with an oral history by the secretary of defense under Bush, Richard Cheney, who led a team of authorities on foreign policy and defense who were at least the equal of any group from previous administrations. Hugh Sidey presents his view of the relationship between President Bush's upbringing as the son of a senator in a comfortable and socially privileged family and his actions as a politician and president. This collection provides insights through others who worked with President Bush as they assess his actions as a communicator, his performance as a domestic and international president and particularly his search for a grand strategy in foreign policy and his dealings with Russia, China, and NAFTA.