Hanna, R: Buke of the Howlat by Richard Holland

- Hanna, R: Buke of the Howlat by Richard Holland 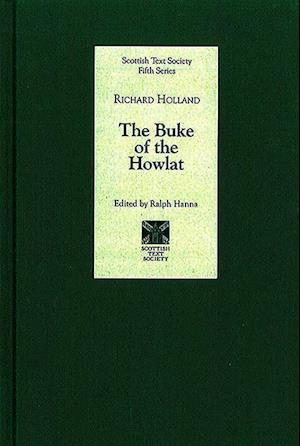 The Buke of the Howlat was composed in the late 1440s for Elizabeth Douglas, wife of Archibald Douglas, earl of Moray. It is one of the great monuments of fifteenth-century Scots verse, perhaps the finest example of Older Scots alliterative poetry, telling a comic fable of an owl's borrowed feathers, his pride and ultimate fall, and a bird parliament which decides his fate. At its centre is a heraldic excurses which leads to a celebration of the virtues of the Douglas family and their service to Robert Bruce in the Scottish Wars of Independence. Its themes therefore focus on Scottish freedom, aristocratic achievement, and good self- and political governance; its influences are drawn from chanson d'aventure, beast fable and complaint, and embrace the French, Scots, Gaelic and English Chaucerian and northern literary traditions, making it of great significance to anyone interested in the late medieval literature of the British Isles. This critical edition provides a new text, with full modern annotation and glossary. Its introduction and notes address the textual transmission of the poem in detail, its traditional alliterative form, the poetic tula, its language, heraldic elements, and historical references and contexts. Ralph Hanna is Emeritus Professor of Palaeography, University of Oxford.