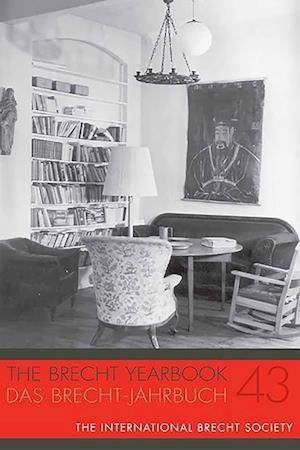 Published for the International Brecht Society by Camden House, the Brecht Yearbook is the central scholarly forum for discussion of Brecht's life and work and of topics of interest to him, especially the politics of literature and theater in a global context. It encourages a wide variety of perspectives and approaches and, like Brecht, is committed to the use value of literature, theater, and theory. Volume 43 opens with a reconstruction of Brecht's two-chorus version of The Exception and the Rule (Reiner Steinweg) and continues with a selection of Helmut Heissenbuttel's reviews of Brecht's work. Four articles (by Christine Kunzel, Carsten Mindt, Judith Niehaus, and Sebastian Schuller) address Brechtian aspects of Gisela Elsner's novels. The next two essays (by Hunter Bivens and Friedemann Weidauer) revisit Brecht's reflections on affect and empathy. Also included are papers from the 2016 IBS "Recycling Brecht" Symposium: on Brecht's recycling of Lenin in his "neue Dramatik" (Joseph Dial), on Paul Celan as a reconfiguration of Brecht (Paul Peters), on Brecht's adaptation of Shakespeare's Coriolanus (Martin Revermann), and on Hilary Mantel's Brechtian reconfiguration of Thomas Cromwell (Markus Wessendorf). The volume features Richard Schroeder's farewell lecture on Brecht's Life of Galileo and an essay by Ulrich Plass on Bernd Stegemann's allegedly Brechtian reclamation of critical realism. It concludes with Zhang Wei's interview with the Chinese dramaturg, playwright, and Brecht translator Li Jianming. Editor Markus Wessendorf is a Professor in the Department of Theatre and Dance at the University of Hawai'i at Manoa in Honolulu.

Forfattere
Bibliotekernes beskrivelse The leading scholarly publication on Brecht; volume 43 contains a wealth of articles on diverse topics and a reconstruction of the two-chorus version of The Exception and the Rule.