The Book of Aggie Lists

indgår i serie CENTENNIAL SERIES OF THE ASSOCIATION OF FORMER STUDENTS, TEXAS A & M UNIVERSITY 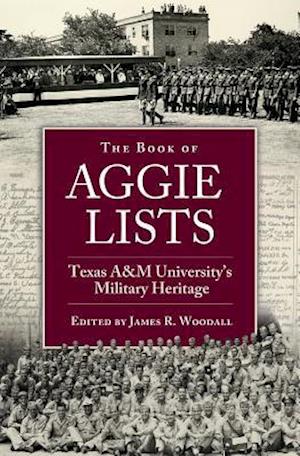 The Book of Aggie Lists brings together in one volume a vast amount of information that will be welcomed by current and former students of Texas A&M University. Focusing on the military heritage of the university--and especially the Corps of Cadets--this reference work is an invaluable resource for researchers and curious readers alike.

Former Commandant of Cadets James R. Woodall and eleven other contributors have painstakingly gathered and organized the names, class years, and ranks of various individuals who served in wars, were decorated, or died in the line of duty, to name just a few of the informative categories presented here. This book represents a way to remember all who served both Texas A&M University and the United States and will aid readers for decades to come. It focuses on and goes beyond the military history of the university to encompass many other fascinating lists, including Hollywood movies with a connection to the university and time-honored Aggie traditions.

The Book of Aggie Lists is a never-before-seen wealth of knowledge and will be a frequently accessed book on shelves across campus and throughout the larger Aggie network. Woodall also invites readers to contribute to a larger, ongoing project to compile additional information and Aggie lists to serve the future generations of Texas A&M University.