The Bonds of Humanity 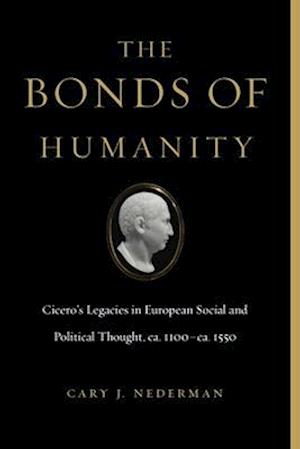 Of the great philosophers of pagan antiquity, Marcus Tullius Cicero is the only one whose ideas were continuously accessible to the Christian West following the collapse of the Roman Empire. Yet, in marked contrast with other ancient philosophers, Cicero has largely been written out of the historical narrative on early European political thought, and the reception of his ideas has barely been studied. The Bonds of Humanity corrects this glaring oversight, arguing that the influence of Cicero's ideas in medieval and early modern Europe was far more pervasive than previously believed.In this book, Cary J. Nederman presents a persuasive counternarrative to the widely accepted belief in the dominance of Aristotelian thought. Surveying the work of a diverse range of thinkers from the twelfth to the sixteenth century, including John of Salisbury, Brunetto Latini, Marsiglio of Padua, Christine de Pizan, and Bartolome de Las Casas, Nederman shows that these men and women inherited, deployed, and adapted key Ciceronian themes. He argues that the rise of scholastic Aristotelianism in the thirteenth century did not supplant but rather supplemented and bolstered Ciceronian ideas, and he identifies the character and limits of Ciceronianism that distinguish it from other schools of philosophy.Highly original and compelling, this paradigm-shifting book will be greeted enthusiastically by students and scholars of early European political thought and intellectual history, particularly those engaged in the conversation about the role played by ancient and early Christian ideas in shaping the theories of later times.

Forfattere
Bibliotekernes beskrivelse Surveys the many different impacts of Ciceronian theories on a diverse array of texts and authors between 1100 and 1550, presenting a counternarrative to the widely accepted belief in the dominance of Aristotelianism in early European political and social thought.