The Birth of New Criticism 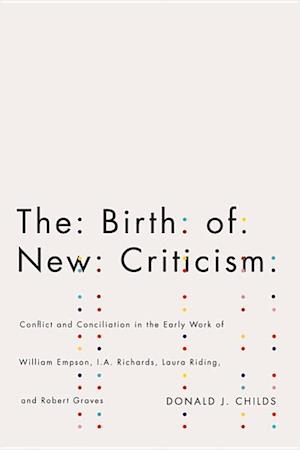 Amid competing claims about who first developed the theories and practices that became known as New Criticism - the critical method that rose alongside Modernism - literary historians have generally given the lion's share of credit to William Empson and I.A. Richards. In The Birth of New Criticism Donald Childs challenges this consensus and provides a new and authoritative narrative of the movement's origins. At the centre stand Robert Graves and Laura Riding, two poet-critics who have been written out of the history of New Criticism. Childs brings to light the long-forgotten early criticism of Graves to detail the ways in which his interpretive methods and ideas evolved into the practice of "close reading," demonstrating that Graves played such a fundamental part in forming both Empson's and Richards's critical thinking that the story of twentieth-century literary criticism must be re-evaluated and re-told. Childs also examines the important influence that Riding's work had on Graves, Empson, and Richards, establishing the importance of this long-neglected thinker and critic. A provocative and cogently argued work, The Birth of New Criticism is both an important intellectual history of the movement and a sharply observed account of the cultural politics of its beginnings and legacy.

Forfattere
Bibliotekernes beskrivelse A groundbreaking account of the origins of the twentieth century's most influential method for studying poetry.