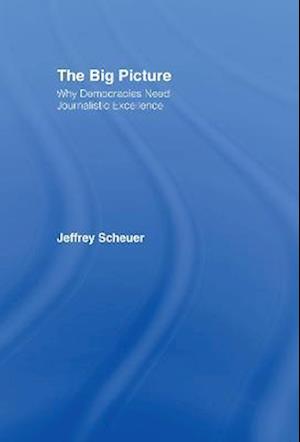 Freedom of the press is the cornerstone of democracy. But, as countless recent examples of lapsed standards in the press since the Jayson Blair affair have shown, the First Amendment is no guarantee that American journalism will be first-rate.A press in crisis is a democracy endangered, argues Jeffrey Scheuer--cultural critic and author of The Sound Bite Society. In his new book, The Big Picture, Scheuer argues that in order for a democracy to thrive it is not enough for its press simply to be free--the press must be exceptional. This book explores journalistic excellence and its essential relationship with democracy, explaining why democracies depend on it and are only as good as their journalism.In The Big Picture, Scheuer explores journalistic excellence from three broad perspectives. First, from the democratic perspective, he shows how journalism is a core democratic function, and journalistic excellence a core democratic value. Then, from an intellectual perspective, he explores the ways in which journalism addresses basic concepts of truth, knowledge, objectivity, and ideology. Finally, from an institutional perspective, he considers the role and possible future of journalism education, the importance of journalistic independence, and the potential for nonprofit journalism to meet the journalistic needs of a democratic society. In lucid and accessible prose, The Big Picture provocatively demonstrates why we must all be vigilant about the quality of journalism today.