The Bible, Homer, and the Search for Meaning in Ancient Myths

- Why We Would Be Better Off With Homer's Gods 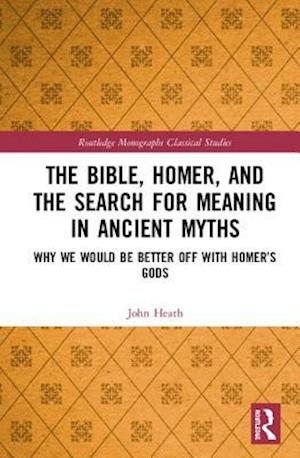 The Bible, Homer, and the Search for Meaning in Ancient Myths explores and compares the most influential sets of divine myths in Western culture: the Homeric pantheon and Yahweh, the God of the Old Testament. Heath argues that not only does the God of the Old Testament bear a striking resemblance to the Olympians, but also that the Homeric system rejected by the Judeo-Christian tradition offers a better model for the human condition. The universe depicted by Homer and populated by his gods is one that creates a unique and powerful responsibility - almost directly counter to that evoked by the Bible-for humans to discover ethical norms, accept death as a necessary human limit, develop compassion to mitigate a tragic existence, appreciate frankly both the glory and dangers of sex, and embrace and respond courageously to an indifferent universe that was clearly not designed for human dominion.Heath builds on recent work in biblical and classical studies to examine the contemporary value of mythical deities. Judeo-Christian theologians over the millennia have tried to explain away Yahweh's Olympian nature while dismissing the Homeric deities for the same reason Greek philosophers abandoned them: they don't live up to preconceptions of what a deity should be. In particular, the Homeric gods are disappointingly plural, anthropomorphic, and amoral (at best). But Heath argues that Homer's polytheistic apparatus challenges us to live meaningfully without any help from the divine. In other words, to live well in Homer's tragic world - an insight gleaned by Achilles, the hero of the Iliad - one must live as if there were no gods at all.The Bible, Homer, and the Search for Meaning in Ancient Myths should change the conversation academics in classics, biblical studies, theology and philosophy have - especially between disciplines - about the gods of early Greek epic, while reframing on a more popular level the discussion of the role of ancient myth in shaping a thoughtful life.