The Autonomy Theme in the Church Dogmatics 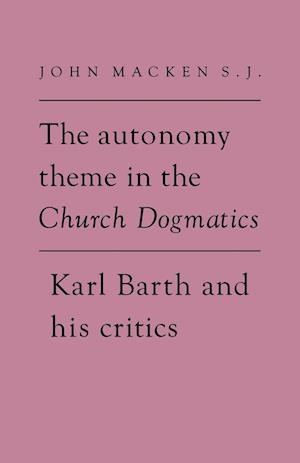 The problem of human freedom before God echoes through the conflicts of western theology since Augustine and Pelagius and has posed an acute question to theologians for the past 200 years. Karl Barth, perhaps the greatest Protestant theologian of the twentieth century, faced not only the question of autonomy but also the theological answers that liberals had attempted to provide to it. His dissatisfaction with their answers led him to start a theological counter-revolution, which was thought to adopt a negative answer to the question of autonomy. In this careful study Fater Macken shows that a major re-interpretation of Barth's thought in this regard took place since 1968, and that - far from being an opponent of human freedom in relation to God - Barth is now thought to have proposed a positive account of human autonomy as his theology developed. Dr Macken demonstrates that Barth was neither fundamentalist nor conservative, but a creative and original thinker. This notable book, written by a Roman Catholic theologian, provides a comprehensive and useful guide to the 'new wave' of German Barth interpretation.