The Authoritarian Family and Political Attitudes in 17th Century England 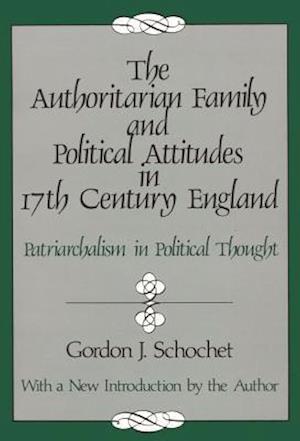 Available for the first time in paperback, this classic study of the relationship between paternal and political authority identifies patriachalism as a leitmotif of western social and political thought since the time of Plato and Aristotle. Gordon Schochet shows that patriarchal doctrines can be found in the writings of all major political theorists form Plato to Bodin and that almost every significant political thinker in the seventeenth century England acknowledged and addressed patriarchalism. In the Stuart period, patriarchalism was the primary alternative to social contract and populist justifications of political authority. Moreover, patriarchal power was a major presupposition of those very doctrines that were offered in opposition to it. The author demonstrates that the ideological, social structural, and philosophic roots of the patriarchal tradition are deeply embedded in the political consciousness and practices of Western Europe.In earlier political thought, familial doctrines provided anthropological accounts of the origins of political order, whereas in the Stuart period, patriarchalism was primarily a justification of political obligation. Analyzing these essential differences, Professor Schochet offers a number of sociological, and virtual disappearance of patriarchal conceptions of obligations during the seventeenth century. Untangling the patriarchal theory, he shows that it comported well with the implicit ideology and everyday life of the masses and was fully consistent with the level of historical awareness of the early modern period.The final chapter traces the ultimate demise of patriarchalism in the eighteenth century and its transformation back into a theory of political origins. In addition, the author discusses a number of important questions about the nature of political theory, how its historical documents may be analyzed, and the resort to symbols in political discourse.