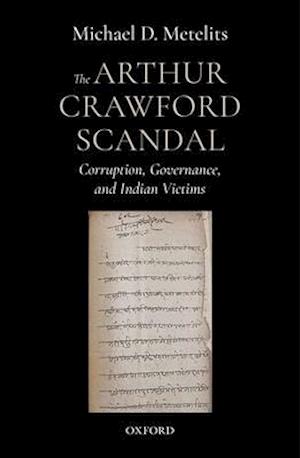 The Arthur Crawford Scandal explores how 19th century Bombay tried a British official for corruption. The presidency government persuaded Indians, government officials, to testify against the very person who controlled their career, by offering immunity from legal action and career punishment.A criminal conviction of Crawford's henchman established the modus operandi of a bribery network. Subsequent efforts to intimidate Indian witnesses led to litigation at the high court level, resulting in a political pressure campaign in London based on biased press reports from India. These reports evoked questions in the House of Commons; questions became demands that Indians witnesses against Crawford be fired from government service. The Secretary of State for India and the Bombay Government negotiated about the Indian witnesses' fate. At first the Secretary of State accepted Bombay Government proposals. But the press campaign against the Indian witnesses eventually led the Secretary of State to order the Government of India, in consultation with the Government of Bombay, to pass a law ordering those officials who paid Crawford willingly, to be fired. Those who whom the Bombay Government determined were extorted, were notto be fired. Both groups retained immunity from further actions at law. Thus Bombay won a victory that almost saved its original guarantee of immunity: those who were fired were to receive their salary (along with periodic step increases) until they reached retirement age, at which time they wouldreceive a pension. However, this "solution" did little to overcome the stigma and suffering of the fired officials