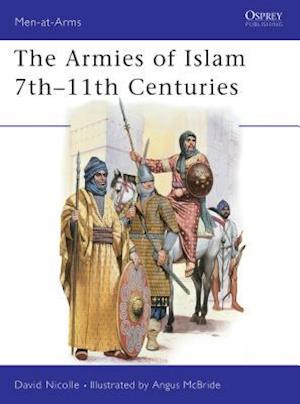 During the Middle Ages, Islam was Christian Europe's only civilized and most troublesome neighbor. The Middle Ages saw almost continual strife between these two distinct cultures. By the time the Frankish Crusaders reached the Middle East at the end of the 11th century, Islam had already incorporated three major races: Arabs, Persians and Turks, each of which contributed different strengths to the armoury of Islam. This title explores the organization, uniforms and equipment of the armies of Islam from the 7th to 11th centuries, backed by illustrations, museum photographs and eight full page color plates by popular Osprey artist Angus McBride.

Forfattere
Bibliotekernes beskrivelse The Men-At-Arms covers subjects as diverse as the Imperial Roman army, the Napoleonic wars and German airborne troops in a popular 48-page format including some 40 photographs and diagrams, and eight full-colour plates.